Linus Torvalds has announced the release of Linux 4.14, the latest stable release of the Linux kernel. Linux 4.14 features a number of new features and changes, and is set to become the next long term support (LTS) release backed for the next several years. We proudly announce the ODROID series on the same boat, ODROID-XU4 / ODROID-XU4Q / ODROID-HC1 / ODROID-MC1 / ODROID-XU3. 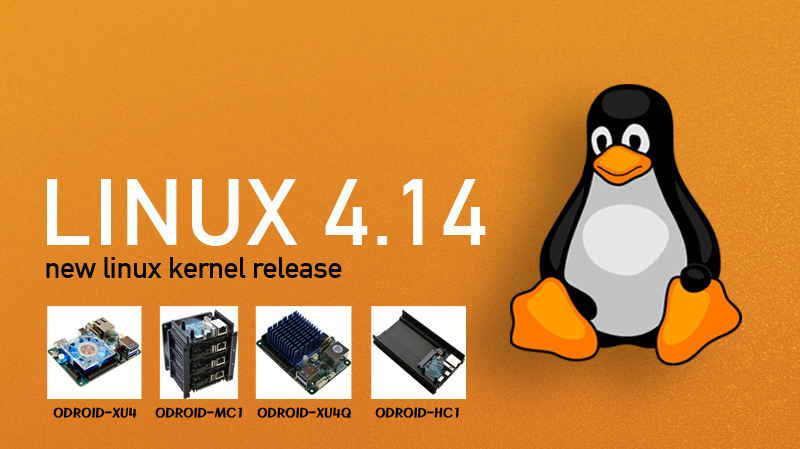 New Ubuntu OS image for the ODROID series has the following features:

With each Linux kernel development cycle, it is getting easier to get updates to the latest mainline kernel due to the efforts of Samsung and the community. Some device drivers are added in the kernel which is not included in the mainline version.

Long Term Support (LTS) kernel support will get support until Jan, 2020. This is great news for the owners of small, extensible, powerful and inexpensive boards such as the ODROIDs.

You can upgrade from 4.9 to 4.14 with following commands. You need to backup your important data first.

When you install “linux-image-xu3” package, you will meet a dialogue box and you have to choose “No” to proceed Kernel update.

After update, you can check Kernel version.

Please note that we will no longer support Kernel 4.9 due to our limited resources. We will keep updating Kernel 4.14 LTS only.

If you have any issues, please post it on the Kernel 4.14 development sub-forum.
https://forum.odroid.com/viewforum.php?f=146

Hardkernel proudly announces the Linux kernel 4.9 release for the ODROID-XU4 and XU3 platforms.
This LTS(Long Term Support) kernel 4.9 will be actively updated until early 2019.

There are tons of commits, patches and merges done for the last few months.
Grab the source code from our kernel 4.9 Github branch.

We must say that Samsung OSG(Open Source Group) helped a lot to make the dream comes true.
They contributed 394 patches that modified 15,856 lines of code in kernel 4.9 tree.

We invite you to a Debugging Party in our community forum. We will pull your ideas, comments and applause.
Try and verify Ubuntu 16.04.2 Mate image which launches the kernel 4.9.11 in that forum too.

Let’s enjoy the party together.